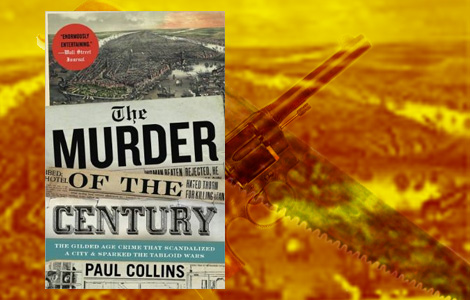 Paul Collins’ true-crime novel delivers just what MojoFiction looks for in a book: a really long title. Officially, the title is The Murder of the Century: The Gilded Age Crime that Scandalized a City & Sparked the Tabloid Wars. We were tempted to quit reading right there, since we were so satisfied with the title. But, seeing as how we actually bought the book, we went ahead and opened it.

The Murder of the Century follows a real-life mystery that occurred in New York City in June of 1897. New York experienced a summer of sweltering heat that year, so it wasn’t unusual for children to play in the water. Then a couple of boys pull a large package from the river that appeared to be leaking blood. Inside the package they found the upper body of a human male, but only the chest and arms, no head, no abdomen, no legs. They turn the remains over to the police, who immediately assume that some brilliant medical students are playing a prank. It wouldn’t be the first time. Unfortunately for New York police, the chest and arms wouldn’t be the only the grisly find in New York that summer.

The following day, in the area around Harlem, a man and his children out for a walk discovered yet another package. This one contained the abdomen and lower legs of a man. When police brought the remains back to the coroner’s office, they appeared to match up directly to the upper-body found the previous day. To complicate matters, the medical examiner announced that the man, whoever he was, had been alive twenty-four hours earlier. This was no medical student prank.

With little to go on from the body (there was no head), and no witnesses, the police hardly knew where to begin. Not so the mighty newspaper engines that were Joseph Pulitzer’s World and William Randolph Hearst’s Journal. They had been duking it out for readership on the streets of New York for some time, and the mysterious homicide and dismemberment shortly before the fourth of July proved too much to resist. Pulitzer deployed his best journalists and Hearst sent forth his Wrecking Crew to scour the city and solve the mystery of the murdered man. The gamesmanship between the two newspapers that followed would crush one paper and elevate the other as they raced to sensationalize the story for their tabloid-hungry readers. Along the way they would impede police investigations, create their own story-lines with questionable (and possibly fabricated) evidence, and yet, ultimately, help connect the clues.

The mystery at the heart of the book is intriguing. And Paul Collins paces himself well, doling out new pieces of the puzzle one at a time amidst the hectic police investigation and shenanigans of the dueling newspapers. The suspects in the crime and the victim are painted vividly, along with the relationship between police and reporters. In fact, that proved to be the most interesting aspect of the overall story, showing not only how competitive media outlets were, even before radio and television, but also how much power they wielded. Unfortunately, outside of that, the narrative stumbles.

There are a lot of players in the story, but no one comes to the forefront other than the suspects. While that may be historically accurate, we really wanted a specific lens to view the story through, whether it was through a specific person and how events affected them, or through a total immersion into the life and times surrounding the crime. But, here, we don’t get many of those gritty details. How old was Hearst during this time? When did he buy the paper? Did he care about real news or just beating the competition? Was there a particular reporter following the case who was affected in some way? What about New York City itself?

The author hints at answers to these kinds of questions, but often only skims the surface, giving just enough detail to get to the next point in the murder case. This gives the story almost a pulp feel. A lazy beach read. Or maybe a tabloid version of the events. Maybe that was the idea. But we felt like he could have offered a little bit more.

That said, it’s still a fascinating and well-told, true-life mystery, with little nuggets such as where the term “Yellow Journalism” originated, a surprising note about Teddy Roosevelt (for uninformed laymen like us anyway), and what autopsy and crime scene investigation was like at the time. His writing flows and it’s always in the service of the story, never delving into minutiae about events that don’t have any bearing on the case.

If you’re looking to immerse yourself in New York City at the end of the 1800s, this doesn’t quite get there. But if you’re looking for a good murder mystery, we can highly recommend The Murder of the Century.