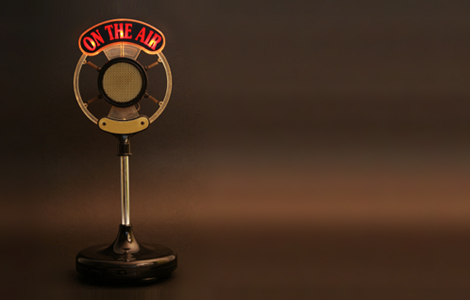 When MojoFiction was a young lad, our dad owned a serious piece of turntable hardware. Sometimes called a radio cabinet, it resembled a squat, wood buffet table, but with a player hidden inside, speakers concealed in both ends, and a slot next to the turntable for keeping a collection of vinyl records. The cabinet, of course, included a radio. However, with the exception of listening to Paul Harvey on the weekend, we mostly played our dad’s records, which were, ironically enough, recordings of old radio shows. It wasn’t uncommon to enter the house and find the kids listening to The Lone Ranger, The Green Hornet, variety shows with Bob Hope and Bing Crosby, Bill Cosby’s early work, and even recordings of the Lucky Strike cigarette commercials that bridged the gaps between songs and comedy routines on the really old stuff.

Sure, we had a television: Cable TV was growing fast and MTV actually had videos; we watched the A-Team; and we learned what Monty Python was. But there was something about those old records, those classic radio bits. The first time you listen to a noir, filling in the atmosphere with your imagination and the studio sound effects coming out of the speakers, or the comedy routine where you finally understood tha Costello is the funny one, you realize how unique it is. Like black and white films (before Technicolor), where filmmakers made the most of a format with techniques that we have a hard time duplicating today, you realize you are listening to professionals exploiting a mode of entertainment to its fullest potential.

It wouldn’t be long after MojoFiction got to know those records that the major format for radio would become shock-jocks and robo-DJs. Mancow would be running Chicago and Howard Stern would be doing…whatever Howard Stern does. Everything else would be local talk shows and popular music. We discovered that the radio, as an entertainment platform, was already well past it’s golden era. Video killed the radio star and all that.

When we talk about the golden age of radio, we’re not really talking about subject matter. Racial views of the time and the aforementioned cigarette ads, among other things, should be kept in the past. It’s the originality, the mastery of the format, the crispness of the comedy that stands out. And it was family entertainment; something you could listen to with your kids. But it was virtually gone before we had a chance to get to know it.

Then we tuned in to NPR.

NPR is, first and foremost, a gateway to global news, a subject generally glossed over on local talk stations. But when they are not reporting immediate global events, they are presenting in-depth looks at everything from little-known musicians to citizens of the world and how past and present events have affected them. Without NPR, MojoFiction may not have discovered cellist Zoe Keating, or realized how strange Jack White can be. We’ve sat by the radio, riveted by a story of police corruption in New York City from an inside whistleblower. Only about six months ago (or so), we waited in our car in the driveway for fifteen minutes while we finished listening to an unbelievable tale about the intersecting lives of an Iranian and Iraqi solder during and after the 8-year Iran-Iraq war (1980 – 1988). Who in America would be bothered to tell that story? They are not afraid to profile obscure people and events. They’re not afraid to tackle everything else either.

We’ve tuned in to NPR on occasion to find someone reading short stories or poetry or chapters of a book, or reviewing indie films, or introducing international musicians. They have quiz shows and Car Talk (recently ended, but what a run!), they have programs devoted to science and even the media itself. But as MojoFiction has gotten older (not that old, okay?) we’ve come to appreciate another aspect of NPR: much of it is family friendly, but still on an adult level.

In MojoFiction’s part of the country, the local NPR station delivers a one-two punch on Saturday evenings with A Prairie Home Companion and Wait Wait… Don’t Tell Me! Funny, interesting, sometimes risqué (we’re looking at you, Garrison Keillor), always entertaining. We like to sit down with our family on Saturday night, turn off the television and the video games, and listen to the these shows. Often while we listen we will play board games. Sometimes we’ll paint or do something else artistic. Once, we did all the “experiments” in the Dr. Dreadful Zombie Lab and instantly regretted it because of all the clean-up afterwards and the sick feeling from eating all that sugar. That aside, we always learn something new and we always laugh a lot. And we do it without staring into the depths of our television. If you’re looking for something new to do with your family and never thought about the radio, you should check it out.

As you may have guessed, we think this radio thingy is great. Why? Radio is a perfect platform for storytelling, unequaled, in our opinion, by anything other than books. Why is it perfect? Because you have to engage listeners intellectually. It’s the only way to visually create in the mind’s eye.  It’s the long-lost art of listening to each other, they way stories used to be told before the advent of the written word (and when education was just for the nobles).  Radio is great because, in that way, its ancient and enduring, a long conversation with anyone willing to listen.

In fact, it amazes us that there isn’t more radio fare out there in the vein of what we get from NPR. Maybe there is and we just haven’t found it. Satellite radio certainly offers something, but how many people are listening to it outside of their car? Still, you can find comedy routines on satellite radio that are just as good there as they are on YouTube.

Our great hope is that future generations will continue to come back to possibilities of radio, as NPR does. Until then, we’ll be listening on Saturday nights to Wait Wait… Don’t Tell Me!, waiting patiently for Peter Sagal to call and invite us to be a panelist on his show. Seriously, what’s he waiting for?