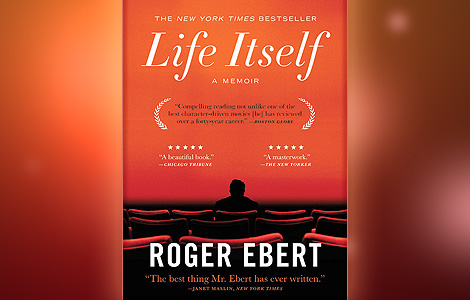 I’ve been slowly reading Life Itself for months, one chapter at a time, usually late in the evening. I didn’t take my time because the book is boring or confusing, or because it isn’t compelling. I took my time because this book demands it. This trip down someone else’s memory lane isn’t for the trivia nut. It’s for the reader who wants to get lost in the dream-like quality of memory. Roger Ebert will always be associated with films, but his memoir is as far from film as it can be.

It started with the blog Mr. Ebert began before his death in 2013. He found himself leaning towards the autobiographical in his online writings and decided to go full-out on a memoir. But how do you write about an entire life? Where you do start? Where do you end (since he was still alive when he wrote it)?

The funny thing about writing, the more you keep at it, the more the ideas flow. Thinking about it won’t get you anywhere. You have to sit down and write. The same thing can be said, at least in my experience, about memories. The more you talk, or write, about them, the clearer they become, and the more you realize you can remember. You might unconsciously embellish certain moments, or unknowingly leave someone out, but it’s in there, waiting to come out.

Real memories are rarely stories, though. They might have a beginning, but lack a middle or a specific ending point. There isn’t a story arc, just things you experienced from moment to moment. Roger Ebert writes in this fashion. Whether he’s writing about his parents, his high school career, or his alcoholism, you understand that he’s not giving you a timeline, he’s sharing important moments associated with those subjects, moments that moved him, that helped him grow, that made him angry or sad or overjoyed. As I read, I found it almost impossible not to sit back and reflect on my own life. It’s not that I’m old, but I’ve lived long enough to separate childhood from adulthood.

Even when Mr. Ebert devotes several chapters to legendary figures from cinema, he doesn’t discuss their work at length, he discusses the people. He recounts the time he spent with them, the way they acted, the things they said, their perspectives on life. It opens a window into the lives of these people as human beings and not as entertainers. Each one is flawed, weird, or, a few times, really drunk. (Though there is a fantastic rant by the great John Wayne, about how modern corporate Hollywood screwed up movies, that still rings true today, 35 years after his death.)

To be sure, Roger Ebert covers a good deal of his life, from the very start to the last chapters where he finds himself ruminating on the inevitability of it all ending. It’s hard to believe that someone most people knew only as that movie critic from Chicago could have lived such a densely packed life. If anyone milked life for all it was worth, it appears it was this man.

But, then again, if you looked back on your own life with such a long perspective, you’ll most likely find that you have done the same. Maybe you don’t have a lot of money or success to show for it. Or maybe you do. Maybe you have a small family. Or maybe you have 4 kids and 8 grandkids. It doesn’t matter. The facts of it all – I went here and I did that – don’t matter so much. Because facts become obscured by time and retelling.

What matters is your memory of it.