We here at MojoFiction have been hard at work for the last couple of months preparing our new novel for publication. We’re done and we have officially published The Girl from I.T.  Here’s what it’s all about.

Drum roll! (You’ll have to imagine it since you’re reading a blog. Trust us, we got this guy called Questlove to perform it and it sounded great in the studio.  So just imagine a really great drum roll that cost us $12,000 to produce because Questlove is, apparently, really famous.  We had no idea.)

The Girl from I.T. 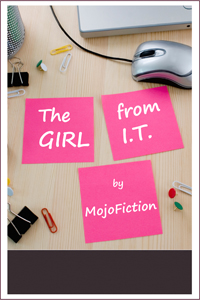 Alice Morgan has a problem. When something good happens she never fails to talk her way out of it. She can’t help it; she just likes to talk. Ask anyone in the long line of her previous boyfriends and employers. Then, when she thinks things are finally looking up, she discovers she has breast cancer. Of course, as could only happen to Alice, immediately after finding out, she’s offered a new job where meets a man she thinks might be the one. Should she tell him about it? Or just call in sick a lot? Unfortunately, it looks like things might get a little complicated…

The Girl from I.T. is a romantic comedy exploring human resolve in the face of adversity — the hope we all have that if you fight hard enough, something wonderful will happen. But, somehow, it’s always in a completely unexpected way.

That’s a very brief overview.  Here’s an excerpt to add a little color.  In this scene, Alice is interviewing for a new job at an online bookstore in Chicago called Green River.  The interviewers are Anthony and Davin.

Davin sat down and handed a manila folder to Anthony.

“We wear a lot of hats around here,” said Anthony.  “Davin likes to know that my I.T. crew can work with his programmers.”

Alice noticed that, as Anthony spoke, Davin tried really hard not to look at him.  It was subtle, but there.

Anthony opened the folder with the resume and studied it for about .08 seconds.  He immediately closed the folder and looked up at Alice.

“Will you excuse me for a moment?” he said.  But his voice choked up when he said it.  He stood up with the folder in hand and walked out of the room.

Through the glass wall Alice could see him stop at a desk a few feet away.  He appeared to be laughing hysterically, even going as far as to pound his fist on the desk to help him get it all out.  Then he scrunched up a piece of paper from the folder and threw it in a waste basket.  Finally, he came back into the office and sat down.  Davin never once looked around during the episode; he only sat in his chair and stared forward.

“Sorry about that,” said Anthony.  “You have a very good resume.  But the first thing I have to ask about is the tour of companies you’ve been making over the past several years.”

Alice decided it was getting to that point, where questions about her previous experience would loom larger than her actual abilities.  She could only offer up the truth because she was, of course, Alice Gwen Morgan.

“That’s really not a crime.”

“Depends on what you talk about.  I don’t mean I was giving away company secrets or anything, I save that talk for happy hour at The Bishop’s Tavern.”

“I mean I talk too much at work,” continued Alice.  “Or all the time, I guess.  I can’t help it.  Everyone says I just need to learn to be tactful, but I can’t lie about anything and I usually say out loud what I’m thinking which turns out to be a lot of stuff because my brain never stops, which I suppose is good because you don’t want your brain to stop, but I swear I saw it happen to a girl once at a bar when she was talking to this hot guy and really slurring her words, probably because her mouth was really tired from all the gossiping or maybe she drank too much, but the guy seemed to like her drunken stupor and hearing about how she could just rock it in bed and who talks about that to a guy she just met at a bar anyway?”

Anthony and Davin stared blankly at Alice.  She thought about asking why, but then she realized that she didn’t actually finish the story.  They were obviously waiting for the finale.

“It was actually my best friend Erica.  But she was just out of college and needed to lose some weight, but the guy was pretty hot, I’ll give him that.  But then she suddenly stopped talking and just stared out into space, not even moving or anything.”

“I know,” said Alice.  “And then she slid right off the bar stool and sprawled out on the floor.  I had to take her home.”

Another brief silence followed.  Then Davin said, politely, “Will you excuse me for a moment?”

The Girl from I.T. is available at Amazon and Barnes and Noble.

Thank you for reading,