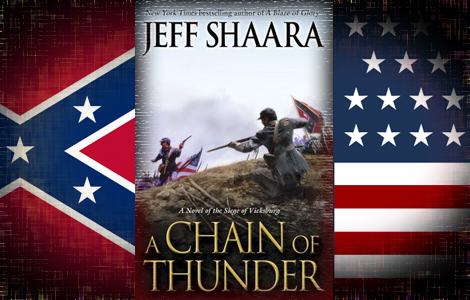 When reading a book about a subject as well-known as the Civil War, you often already know the outcome of the tale. That leaves it up to the author to find a way to keep the story fresh and hold the reader’s interest. Once again, author Jeff Shaara proves he can handle the pressure with his historical novel A Chain of Thunder.

Following the battle of Shiloh, the subject of Mr. Shaara’s previous novel, A Blaze of Glory, Union soldier Fritz Bauer finds himself deep in the heart of Mississippi, marching in General Ulysses S. Grant’s army towards the city of Vicksburg, a valuable piece of real estate that Grant believes will solidify the Union’s control of the Mississippi river, cutting off that supply route for the South and allowing the North to use it freely. Unfortunately, the army of Confederate General Pemberton occupies the city. The river protects them on the west side while their brilliantly engineered earthworks and entrenchments block any attack lines from the east. The Confederate soldiers are dug in deep behind their walls of earth and ready to show the North they can handle whatever Grant can throw at them. What’s more, Confederate General Johnston’s army is out there somewhere, on the other side of the Union lines, and could be marching towards Vicksburg to route the Union army.

Bauer and his fellow soldiers, however, are emboldened by a series of victories on their long route to Vicksburg, including a one-sided engagement with General Johnston at Jackson, the state capital. As they approach Vicksburg, victory seems inevitable. Only after two arrogant and disastrous assaults on the brutal Confederate defenses does Bauer realize that nothing is assured, except perhaps the threat of death at the wrong end of a Confederate musket.

A Chain of Thunder could have weighed itself down with a long narrative focusing on the gritty details of siege tactics and the minutia of daily army life under such conditions, and while the author does get into that, he takes a different approach to get there, giving the reader a broader view of the theatre of war in the west by following Grant’s army through a campaign of battles leading up his ultimate goal: Vicksburg. The first half of the novel lays out the situation each army finds themselves in. Grant is sliding his army south of Vicksburg and appears to be en route to Baton Rouge or farther south. Actions by Union cavalry raiding Confederate outposts in Mississippi seem to support this conclusion. Pemberton has been ordered by Jefferson Davis to defend Vicksburg, while Johnston holds up in Jackson. Thinking that Grant may actually be heading for Jackson, Johnston orders Pemberton to march his army west and meet Johnston at Clinton. Poor communications and confusion between the Confederate armies lead to a series of battles in which Grant constantly holds the upper hand. Eventually, he pushes Pemberton back to Vicksburg.

The second half of the novel follows General Sherman, General Grant, and Fritz Bauer on the North side as they attempt to take Vicksburg by force. Bauer is on the front lines and experiences the terror of battle and the frustration of a siege from a more relatable perspective than the generals, who provide the historical detail, the how’s and why’s of the campaign.

In Vicksburg, Mr. Shaara focuses mainly on a civilian named Lucy Spence, who can’t sit idly by while soldiers die in defense of Vicksburg.  So she volunteers as a nurse at a hospital just outside the city.

The character of Lucy Spence proves the author’s most effective tool for drawing the reader in to the effects of a long siege and the horrors of war thrust upon the civilian population. Lucy experiences everything, from watching both sides trade artillery fire with her fellow citizens, as if it’s some kind of evening show, to leaving her destroyed house to live in a cave hastily carved out of a hillside, to holding a soldiers arm in place while the doctor saws it off, only to hear the doctor say the soldier might live through it.

A Chain of Thunder is an outstanding novel of the Civil War amid a plethora of Civil War books out, due to the anniversary of the start of the war. Even when it comes to the grind of the siege, it never gets bogged down, it never feels slow. The details of the siege of Vicksburg are fascinating; the scenes of battle are memorable, but never glorified; and the characters of Lucy Spence and Fritz Bauer provide the needed humanity to draw the readers in with their struggles. It’s the second book of a trilogy, but you don’t have to start with A Blaze of Glory.  These stand alone.

Side note: I had a fleeting thought at the end of this novel.  I would take this with a grain of salt, as they say, but here’s what I thought: While almost certainly unintentional by the author, I couldn’t help but draw parallels to events happening today. While today’s weapons may be more terrible, and the toll of human lives lost ticks higher, the horrors of urban battle seem to have changed very little in the last 150 years.