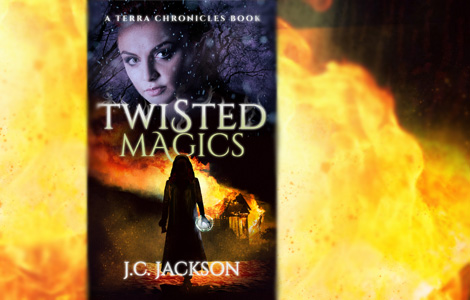 First off, I’ve seen several books with a similar name – make sure you get the right one!

Okay, so I’ve sorta been tuned in to the fantasy genre lately, party with books, but also because I watched The Shannara Chronicles on Netflix recently. So I went searching for something interesting and ran into Twisted Magics by J.C. Jackson.

Twisted Magics takes the staples of the fantasy genre – elves and halflings and magic, et al. – and places them in a modern world of cars and cell phones. Other novels have gone a similar route, but they seem to mostly be about vampires. Yeah, you’ll find a vampire here, too, but he’s not a major character. This one is mainly about elves.

On loan from the Arcane College, Ketayl works as a researcher at the TIO, an intelligence agency in the city of Great Tree. She spends her days cooped up in the lab, investigating arcane magic and crimes involving it. In the middle of the night, she receives a call from her boss to accompany her co-worker, a dark elf tracker named Retanei, on a field assignment in a neighboring town to investigate a possible bombing incident that appears to be arcane in nature. Ketayl has no desire to work in the field and doesn’t understand why they chose her … until she arrives at the crime scene and discovers that the arcane magic has been manipulated in ways she can’t understand, to devastating effect. Even stranger, instead of dissipating, the arcane magic keeps flowing, powered by an unknown source of energy that affects her in strange ways when she close.

Who set off these arcane bombs and why? More importantly, what have they done to the arcane magic and to what is the end game?

There is a lot more to the story, of course – paladins and divine magic; spell battles and murders; all sorts of fun stuff. At its core, though, it’s essentially a mystery novel supporting several linked mysteries, not all of which are answered by the end. The unanswered questions are okay, though, as this is the first in a series, which would suggest those loose threads will be followed up on. The larger mystery here is self-contained.

One of those mysteries revolves around arcane magic itself. The author, through the main character, examines magic on an almost scientific level. What are its limits? How does it interact with technology? There are several other fascinating avenues the author goes down. I felt like the author enjoyed getting into it and, in fact, I would have liked an even deeper exploration of that in the story.

But this novel is about Ketayl, a richly drawn character who finds herself at the apex of each of those mysteries. Ketayl exhibits strengths in her intuition and hidden magic abilities, but she also has weaknesses in her introverted nature. She sometimes doesn’t question things she should and then turns around and takes matters into her own hands when she shouldn’t. She’s an excellent protagonist for a series such as this because her very nature drives much of the drama around her, even if she doesn’t realize it. You could get hooked on an interesting character like this.

Unfortunately, Ketayl’s character development does plateau about mid-book. I wanted to see more of an overall arc. I thought some of her internal issues and side dramas with other characters became a little repetitive. Again, though, first of a series, so maybe we’ll see greater development in the next one.

That leads me to my only other complaint. The author presents her world and her characters as if the reader already knows all about it, as if we’ve all been exposed to drow and dark elves and paladins. The author has a good foundation here, don’t limit the audience! I wanted more information about the Arcane College; I wanted to feel immersed in the town of Ocean’s Edge; what are the inner workings of the TIO? Is the city of Great Tree supposed to be a metropolis? Is there actually a big tree somewhere? I guess I wanted a little more atmosphere, since I’m new to the author’s world. That would have sold it for me.

As it is, I enjoyed reading Twisted Magics. If the author expounds on the character in book two, and delves deeper into the machinery of arcane magic, I’d be really interested in reading it.