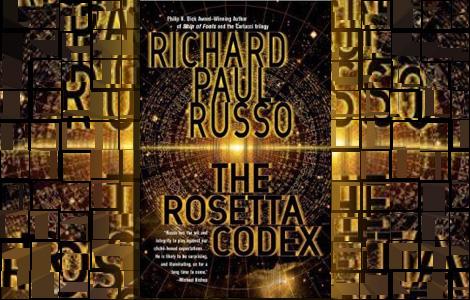 Science Fiction is similar to fantasy; it usually requires some kind of world-building. But where fantasy world-building is often filled with intrigue and mystery, I’ve found some science fiction to be overly expository, which can be dull or lead to really long books.

In The Rosetta Codex, author Richard Paul Russo skews in-depth world-building in favor of immediate action. That’s probably a wise choice, because the story focuses entirely on one character. With one focus, the author can play his cards a little closer to the vest and give us a limited view of the universe through only that character’s eyes. It lets your imagination fill in some of the blanks, which can be fun. There are some pitfalls though, when creating that balancing act between world-building and storytelling.

Marooned in the harsh wastelands of a hostile planet at the age of five, Cale Alexandros lives as a slave, with no idea of his life before and no prospects of a life now. His only real memory is a cryptic final word from his father instructing him to never tell anyone the family name. Fed up with slave life, Cale tries to escape, only to discover that the rest of the world is just as terrible. But then a solitary trader finds him and shows him the way out to a great city called Morningstar. Cale takes the journey alone. Along the way he happens upon the remains of a long-gone alien civilization. But he won’t realize the significance of his discover until he reaches Morningstar. By then, he’s seeing his world in a different light. Who was the mysterious trader? And what is so important about the dead alien culture?

The Rosetta Codex is a fast-paced novel, but the author is up to the task with effective prose that doesn’t meander or overly-complicate matters with sub-plots that go nowhere (as world-building in sci-fi sometimes leads to). Cale’s journey is dangerous and suspenseful. Much of the time is stuck in his head as he experiences the world around him, but it’s handled well and builds the character.

Unfortunately, Cale’s journey to Morningstar is only the first act of the book, and even his arrival and stay at Morningstar are only stopovers to a longer journey, and a more complicated plot. I say unfortunately, because once Cale arrives at Morningstar, the author opens the story up to more characters and events. That’s fine, but the events take place over the course of several years and lead to further events that stretch out over even more years. It’s all very compressed in the narrative. Within that time characters quickly come and go. It’s hard to feel anything for them or really gauge their impact on Cale.

The same is true for the universe the author has constructed. There are other planets and other species, but they are given short shrift and never feel realized, and any interest that pops up is snuffed out by the hurry-up offense run to keep the plot going (sorry, football reference). By the end, I had a hard time feeling anything at the resolution for both Cale and the plot. It just didn’t seem to matter. It didn’t feel important enough. Cale’s character arc seemed to fall short.

I said world-building is a balance with storytelling in science fiction, and I think the balance is lost here. There are lot of great ideas and interesting characters. They needed an extra book (I can’t believe I’m saying that) to flesh them out. They need fleshing out because the reader needs to better understand their importance to Cale, their motives for their actions, what stakes they are playing for. It’s all a little muddled and leads to a generic conclusion.

That’s not to say The Rosetta Codex isn’t an interesting book. It just covers too much ground in too short of a time. The author is a good writer with a fully-stocked imagination. The characters he does develop are three-dimensional and worth reading about. The trip through the alien portal at the end is fascinating (I won’t say any more about that development). It’s everything science fiction should be.

He just has too many ideas for one novel.